While suffering from amnesia, Kris flashed back to her childhood.[2] She remembered it as very happy, and briefly wished she could return to it. According to her aunt, some members of her family affectionately referred to her as "Sweet Christmas".

Kris's mother gave her a hardcover copy of Hansel & Gretel, which Kris considered a good luck charm and took with her wherever she went.[3]

Kris described her father as someone who got down on his luck and started drinking, but when he got dried out "he sure was a hell of a guy".[4] During the christening party for Charlie's yacht Kris told Bosley that she didn't like champagne,[5] but a few months later when he told her that there was no money in the budget to have champagne to toast their new offices in Hawaii she offered to pay for it herself.[6]

When asked if she had ever lost a parent or a sibling, Kris replied that she had lost a friend (implying that both her parents were still alive).[7]

Kris was trained at the Police Academy in San Francisco.[8] One of her duties as a member of the San Francisco Police was to work as a switchboard officer.[9] While still a police officer, Kris worked vice for two weeks. During this time she arrested Mary Grainger on a charge of prostitution. Mary killed herself later that same day.[10]

Kris had many skills. She was trained in unarmed combat and was proficient with handguns, however it was not until some time into her career with the Angels that she first found herself using deadly force by shooting a man, though that individual ultimately survived[11].

She knew how to scuba dive.[12] Kris knew how to create traps and snares in the wilderness. When Kelly asked her where she'd learned that skill she said, "old movies".[13] There is a callback to this later after Kris swings on a vine and knocks out a pursuer, and gives credit to old Tarzan movies.[14] Kris could use forensic chemistry to identify a carpet stain as blood[15] and organic chemistry to operate a still.[16]

Kris did not understand Latin,[17] though she was the first one in her grade school to learn Pig Latin.[18] She knew how to surf.[19] She was a trained masseuse.[20] She didn't recognize the call of a peacock.[21]

Kris expressed disappointment when one of her covers required her to audit some university classes, her expression and tone of voice conveying a dislike for school.[22] This was echoed when she was required to study up on organic chemistry before a case.[23] In 1979, she was awarded an honourary degree from Blackmoor College in recognition of her contribution to the solving of a murder that had happened on the campus.[24] Kris went to truck-driving school to learn to drive an eighteen-wheeler for a case in 1979.[25]

Kris studied roller skating with Kenny Daniels, and became quite comfortable on them. She was sufficiently skillful to successfully audition for a chorus member part in a roller disco show. Presumably she stopped taking lessons after Kenny's arrest.[26]

Kris knew how to dance the tango.[27]

Kris considered herself a great cook.[28]

Kris fell in love with Bill Cord. After finding out that he had also become intimate with Kelly, she confronted her and told her that she would never give him up. After he died she submitted her resignation to Bosley, though was ultimately talked out of quitting.[29]

At first Kris worked alongside Sabrina Duncan and Kelly Garrett. When Jill visited they briefly worked together. After Sabrina's departure, Kris worked with Tiffany Welles and then Julie Rogers.

Kelly and Kris competed for the love of Bill Cord. Neither of them was willing to back down until after he died. At that point they each took the blame for letting things escalate, and patched things up.[30]

Kris was played by Cheryl Ladd in seasons two through five of the series. 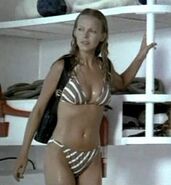 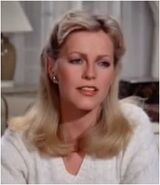