“Once upon a time, there were three little girls who went to the police academy…” They were assigned such hazardous duties as writing traffic tickets, typewriting and playing crossing guard. When enterprising tycoon Charlie Townsend realized their talents were being utterly wasted, he hired them as private detectives. The only catch: because Charlie insisted on never being seen, the "Angels" as he called them, never knew what their benefactor/employer looked like.

In the series pilot that launched one of the biggest hits of the 1970s, a wine heiress asks the angels to help her prove her father was murdered by the man who now runs the family business. The wealthy Vincent Le Mer has been missing for seven years, and is about to be declared legally dead. His daughter, Janet, has not been in contact with the family for some time; so his second wife will inherit the estate. Kelly shows up at the house, posing as Janet Le Mer. Mrs. Le Mer and her associates accept her story, but try to poison her. Kelly is exposed as a fraud when the family receives word that the "real" Janet (actually Sabrina) is on her way to town. Kelly claims to have inside information about the Le Mer fortune, and promises to keep quiet about the attempt on her life in exchange for a share of the estate. Sabrina shows no interest in the inheritance, save for a portion of swampland that she would like to convert into a bird sanctuary. Bosley snoops around the swamp and allows one of Mrs. Le Mer's cohorts to capture him. He claims that there is oil on the property. Panicked, the man tries to dig up Mr. Le Mer's body and remove it before the property transfer can take place. The Angels, with some help from the police and a friend of Janet's, catch him in the act and apprehend him. The Angels learn that their client was Janet Le Mer, who had hoped to expose the truth about her father's murder. 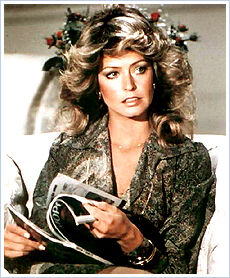 This 72-minute pilot film of the Charlie's Angels series originally aired as a movie-of-the-week in 1976 and stars the three original "Angels": Sabrina (Kate Jackson), Jill (Farrah Fawcett-Majors), and Kelly (Jaclyn Smith). Also appearing in the pilot episode were David Doyle (as the loyal officer manager John Bosley) and David Ogden Steirs (as the companies lawyer Scott Woodville). Many of the scenes used in the opening credits of the series are from the pilot film

Filming began in July of 1975. Due to the length of the program, the pilot has rarely been shown. A ratings powerhouse when it premiered on March 21, 1976 (got a 54.8 viewing share), Charlie's Angels resulted in the long-running (and frequently recast) weekly series, which aired from September 22, 1976, through August 19, 1981.

The pilot was set up a bit differently that the series. The Angels were private detectives and they did not use guns. They used their wits and brains and were masters of disguise. It was not until the series that the Angels had guns in their hands and had martial arts skills. The Angels also worked beside two men, one was John Bosley (David Doyle) and Scott Woodville which was played by David Ogden Stiers. This is the only Charlie's Angels episode in which David Ogden Stiers appears. When the series was picked up later that year, his character of Scott Woodville was cut. Upon its initial airing, the pilot drew a 54 share in the Nielsen ratings, which translates into over half of all television sets in the country in use that night were tuned in. The pilot ranked 3rd among all tele films for the year and when it was re-aired on September 14, 1976, it ranked 4th. |} After finally finishing production on the pilot, the series was again rejected, this time by ABC's New York head, Fred Pierce, who didn't like the concept of the Angels working for a boss they knew only via telephone. So, on the spot, Spelling devised the scenario that there would be a main title that would feature Charlie saying: "Once upon a time, there were three young ladies who graduated from the police academy and were given outstanding jobs. One is a traffic cop helping kids across the street. One is a girl typing in the office and one is a meter maid. I took them away from all that. Now they work for me. My name is Charlie." Tinkering ensued, but the idea stuck, and the show was greenlighted - again.

Originally, the producers of Charlie's Angels wanted a blonde, a redhead and a brunette for the angelic trio but they wanted both Kate Jackson and Jaclyn Smith so bad that they gave up the idea. Initially, Kate Jackson was intended to play Kelly Garrett, but at the last minute she decided to switch to the more challenging role of Sabrina Duncan as outlined in the pilot script by legendary Hollywood screenwriters, Ivan Goff and Ben Roberts. As a result of Kate Jackson's last-minute decision to play Sabrina instead of Kelly, Jaclyn Smith is prominently featured in the first third of the pilot as she establishes her cover as the phony heiress, Janet Le Mer, to the Samarra Vineyard.

Charlie's Angels pilot is pure entertainment. It plays mostly like the TV movie it is, and is never more than fluffy, warm-hearted entertainment at best. It's somewhat interesting to note the presence of David Ogden Stiers as another of Charlie's henchmen, a role later dropped for the actual series, where Bosley was deemed sufficient for all normal purposes. However, the biggest shock is perhaps an unknown Tommy Lee Jones, playing a childhood friend of the heiress, who threatens to expose the Angels' plot. He probably gets more screen time than Fawcett-Majors, who is barely used at all in this episode: she gets one real scene of note, an entertaining performance as a backwoods bimbo luring the bad guys into buying her land on the basis they think it's loaded with oil.

Retrieved from "https://charliesangels.fandom.com/wiki/Charlie%27s_Angels_Pilot_Movie?oldid=5756"
Community content is available under CC-BY-SA unless otherwise noted.