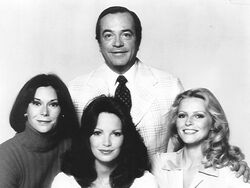 Charlie's Angels is a television series about three women who work for a private investigation agency, and is one of the first shows to showcase women in roles traditionally reserved for men. The series was broadcast in the USA on the ABC Television Network from 1976 to 1981 and was one of the most successful series of the 1970s. Charlie's Angels was created by Ivan Goff and Ben Roberts and produced by Aaron Spelling and Leonard Goldberg. In pre-production, the original proposed title was The Alley Cats, with the idea being that the show would be a vehicle for up-and-coming actress Kate Jackson, who had proven very popular with viewers in another police drama, The Rookies. Jackson is also the one who came up with the new title for the series upon seeing a painting of three angels on Aaron Spelling's office wall. But Harry's Angels was written off so as not to conflict with another television series, Harry O. Kate Jackson was initially cast as Kelly, but the actress was more attracted to the role of Sabrina, and her request to switch roles was granted; thus, the early part of the pilot relies very heavily on Jaclyn Smith, as the casting change had been made too late in the day to make a further rewrite.

Three women, the Angels (originally Kate Jackson, Farrah Fawcett-Majors, and Jaclyn Smith), graduated from the Los Angeles police academy only to be assigned such duties as handling switchboards and directing traffic. They quit and were hired to work for the Charles Townsend Agency as private investigators. Their boss, Charlie (voiced by John Forsythe), is never seen full face. (In a few episodes the viewer sees the back of his head and his arms, and he is often surrounded by beautiful women.) Charlie assigns cases to the Angels and his liaison, Bosley (David Doyle), via a speaker phone. Fawcett-Majors and Jackson left the series during its run. Fawcett was replaced by Cheryl Ladd as Kris Munroe, Jill's sister and a former police officer from San Francisco. Jackson was replaced by Shelley Hack as Tiffany Welles, a former police officer from Boston. In the final season, Tanya Roberts replaced Hack as Julie Rogers, a former model.

Like other American TV crime shows of the 1970s, Charlie's Angels was generally formatted in the way of a procedural drama. Most episodes followed a regular structure whereby a crime is committed, the Angels are given the case details by Charlie and Bosley at the Townsend Office and the trio go undercover (usually involving something skimpy for Kelly and Jill (later Kris)) Towards the end of the episode one of them is uncovered and it is a race against time for the others to rescue their friend before they meet some horrible fate. Inevitably, the final scene would be back at the Townsend Office with Charlie offering his congratulations for a job well done.