It all began in 1976 with the Charlie's Angels Pilot Movie that aired on ABC on March 21, 1976. This 72-minute pilot film of the Charlie's Angels series originally aired as a movie-of-the-week and stars the three original "Angels": Sabrina (Kate Jackson), Jill (Farrah Fawcett-Majors), and Kelly (Jaclyn Smith). The pilot drew a 54 share in the Nielsen ratings, which translates into over half of all television sets in the country in use that night were tuned in. The pilot ranked 3rd among all tele films for the year and when it was re-aired on September 14, 1976, it ranked 4th. ABC placed Charlie's Angels series on to their fall 1976 schedule. The rest is television history. The pilot was set up a bit differently than the series. The Angels were detectives and they did not use guns. They used their wits and brains and were masters of disguise. It was not until the series that the Angels had guns in their hands and had martial arts skills The Angels also worked beside two men, one was John Bosley (David Doyle) and Scott Woodville which was played by David Ogden Stiers. Yet, when the series was made the character of Woodville was axed.

The TV series inspired two feature films from production company Flower Films: Charlie's Angels (2000) and Charlie's Angels: Full Throttle (2003), both directed by McG and starring Cameron Diaz, Drew Barrymore, and Lucy Liu as the three angels, with John Forsythe returning to voice Charlie. Bosley was played in the first film by Bill Murray, while the second film cast Bernie Mac as Jimmy Bosley, John's adoptive-brother. The second movie had more nods to the TV series than the first movie in the series did, perhaps due to complaints from fans of the TV series. Whereas most movie remakes of 1970s TV shows, like Starsky and Hutch, are actually remakes, the Charlie's Angels films are set in a different time.

The mythology goes that whenever an Angel leaves, she is replaced so there are always three (seen in the TV show). Liu, Barrymore and Diaz's characters are not based on the Angels in the show, but are their "successors". To prove this fact, Demi Moore's character, who is a 'fallen' Angel, quotes; "Back in my day — we used guns", which refers to the lack of martial arts in the TV series, while it is the preferred form of combat in the films. In the TV series, the Angels were more police-like, generally using guns. Physical struggles, were, however, common. In fact, the silhouette logo of the TV series does show one angel with her hands in a karate-like pose (and the other two with a gun and a walkie-talkie). The karate pose is often included when the show is being spoofed. The martial arts theme in the movies can be seen, in a way, as based on the original TV logo.

Also, Jaclyn Smith reprised her Kelly Garrett role from the TV series, who Dylan (Barrymore) meets in a Mexican cafe when she decides to leave the Angels. Kelly persuades her to rejoin the Angels with an inspiring speech. This reinforces the fact that there were not just three Angels (in fact in the TV series the viewer sees six different Angels), but there have always been three Angels at any one time. 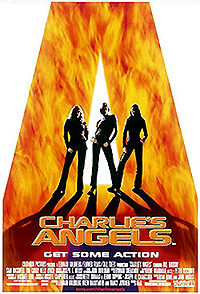 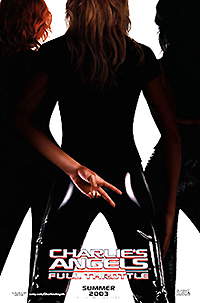